I must apologise profusely for an absense of posts recently and will resort to the excuse that we've had a few ups and downs here in Frugaldom. Fortunately, they haven't been enough to halt proceedings in the garden, but I've been doing extra hours creating a new Facebook page for the future microholding and eco-arts project, so that has taken up a fair bit of time.

Kitchen work stopped almost 6 weeks ago and we haven't seen the joiner since, so no further progress in that department. It now means that the renovation of the outbuilding has started before the kitchen is finished - something I had certainly not wanted happening, as I just knew it was going to cause a few problems.


Lady luck hasn't been shining on me recently, although nothing tragic has occured in comparison to the woes of others. Firstly, the joiner going AWOL hasn't helped, as it means we are still without a kitchen. Fortunately, he fitted a door to the bathroom before disappearing! Then, within the space of 48 hours, I fell all my length, I dropped my new (bought with Buddy Points) camera into a rock pool, my beloved 'Floppity' rabbit suddenly died (she's now buried at the bottom of the garden) and our out-building work is proving to be far more than first expected.

The outbuilding refurbishment was primarily to make the building safe and then go from there - transforming it into a working space in the garden with a nice new logstore attached. But it has almost turned into a complete rebuild, owing to how rotten the timbers, main wall, windows and roof are, so costs could run into the thousands. Work is progressing well in that area, it's just a bit untidy out on the patio, we've lost all use of the building while work progresses and costs are escalating by the day. This, in turn, could start eating into the house repair funds.

I guess it's only money... it's much better spent making the place safe than on anything else. We have a wind and watertight roof over our heads in the house, we have electricity and we have water, so I am grateful for all of that.
﻿ ﻿
We have made some good progress in the garden, what with all the dry weather we've had here in our tiny corner of southwest Scotland. Unlike elsewhere in the UK, we have missed out on continial winds and rain, so there has been no flooding or storm damage. Indeed, the worst damage suffered here was when all the tomato seedlings got scorched to death in the blazing sun last month.
﻿﻿
Remember the neighbour's conifer tree that had to be felled? I have used the logs from that to build an ericaceous bed that is now home to irises, heather, my log man bird table (see picture above) and I have been rash and treated myself to 3 blueberry bushes and a small magnolia, courtesy of the fantastic Thompson & Morgan special offers. EXCELLENT! 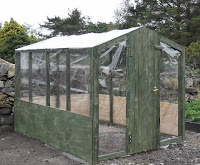 In addition to this, Frugaldom now has a recycled greenhouse, made from the plastic from a friend's old greenhouse, wood stripped from pallets and my one concession - some extra timber to make the structure secure. It now has a slab path, potting bench and tools, tomatoes, cucumbers, my grape vine and an assortment of seedlings in it, plus it's set close to the new bird table, so the feathered visitors are now quite comfortable about feeding there while I'm in the greenhouse.

That's about it for now - so much to tell you all but have run out of time again - just been called for coffee on the patio so we can discuss the on-going plans for this outbuilding. Have to admit that I'm a little bit excited about the prosepcts of it being done for the summer but my heart sinks every time I look at the catastrophe that was just beginning to look like a partio until last week.

I promise to return soon and update with more photos - back to using the old camera but it's the same memory card, so no photos lost. I'd have been mader, still, at that.