It's that time of year again, time for spending what we can afford on gifts for friends, family and loved ones. Homemade gifts abound, as do decorations, rhubarb and elderberry fizz, ginger beer, cakes, shortbread and, for us here in Scotland, the traditional 'clootie dumpling'. For anyone who missed last year's copy, here are the basic recipes I use.


Having moved house, I still haven't unpacked my cookie cutters, so this year's shortbread had to be cut into rounds using a tumbler.

Mix the butter, sugar and flour.
Place the resulting dough in the fridge for half an hour before rolling and cutting
Bake on a floured tray for approximately 25 minutes at 170C
Remove from oven, sprinkle with sugar and cool on a wire rack.


I used the old measurements (ounces) and got 24 shortbread biscuits from this.


Next up was the clootie dumpling, so my old, trusty cloot (cloth) got boil washed beforehand. 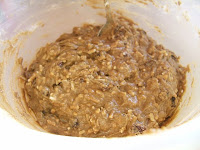 Mix all of the above dry ingredients together in a large bowl, then add 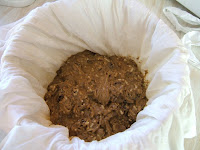 1 large tablespoon of treacle
1 large dessertspoon of syrup
Enough milk to bind the mix together into a soft consistency without it going mushy.

Lay out the wet cloot / cloth and sprinkle plain flour liberally across the middle part, where the mix will be poured. (I use a round cloot/cloth cut from an old cotton tablecover, but a piece of muslin or even a cotton tea towel would do.)

Pour all of the mix into the centre of the cloth. 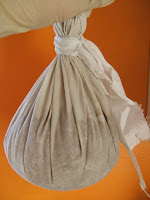 Gather up the edges and tie them all with string or a piece of cloth, leaving enough room for the mix to expand as it cooks. 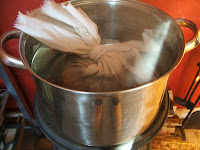 Gently lower the dumpling into the pan of boiling water.

This now needs to be kept on the boil for three to three and a half hours, always ensuring that the water level doesn't drop.

It's also wise to check that you have left enough room for the mix to expand in the cloth. We don't want any episodes of dumpling bursting oot its cloot!

Traditionally, coins or lucky charms would be cooked in the dumpling, as gifts for whoever found them in their serving. This practice has slowly fallen by the wayside for health and safety, food hygiene and dentistry reasons, but some stalwarts still follow tradition! Best to ask your host before biting into a big mouthful of clootie dumpling, especially if your host happens to be a wacky, Scottish traditionalist.

Removing the dumpling from the cloth can be a bit hazardous, so use tongs to lift it from the boiling water and take great care not to drop it. I find it easiest to place the whole thing into the mixing bowl until the cloth is untied - a tricky process that's easier done if you have long nails, rather than burn your fingers. The prongs of a fork work quite well, too.

Turn the dumpling out onto a large plate - at this stage it will look very pale and pasty or, as we say here, 'peely wally'. 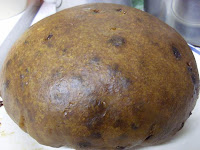 Sprinkle with some sugar and place into a hot oven for approximately 15 minutes, keep checking it doesn't burn.

During its time in the oven, your dumpling should develop a lovely, brown, leathery-looking skin. At this point, it is ready for eating hot, served with cream, custard or even some milk. You can decorate it with a small sprig of holly and a dusting of icing sugar if you really want it to look 'posh'.

If it's not needed at this time, allow your dumpling to cool, wrap it in tinfoil and keep it until it is needed.

Once thawed, dumpling can be reheated in the microwave, oven, grill or steamer.

If reheating dumpling in the oven, wrap it in tinfoil to prevent it from drying out, you can uncover it for the final few minutes.

If grilling, it's probably best to slice the dumpling first.

If reheating in the microwave, plate up the servings and cover them with an upturned bowl or microwave safe cling film. 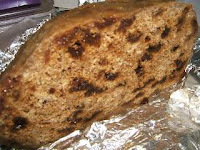 Have you had your dumpling this year?

NYK Media
http://www.scottishmultimedia.co.uk
Posted by NYK in Frugaldom at 13:46