A Day Out at Wigtown Agricultural Show

Even Frugalites Have Day Trips
Yesterday, 3rd August, was Wigtown Show. It's an annual event that has been running for the past 200 years and one that we try not to miss. Son was home to hold the fort, so we had a frugal day out. £15 for 2 adults and car parking isn't that much, in the grand scheme of things, is it? 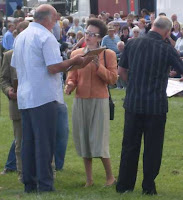 This year was the bicentenary and, to mark the occasion, HRH Princess Anne attended. It's the agricultural community's biggest event of the year, so it is always very well attended. We are normally treated to a shower of rain but this year the sun shone throughout the day and a great tme was had by all.
HRH took the time to wander around the showground, chatting to many of the locals and stallholders. Things about here are usually of an informal nature and yesterday's event was no different. It's seldom you find many false airs and graces around these parts, most refreshing, albeit a little disconcerting for some of the visitors. 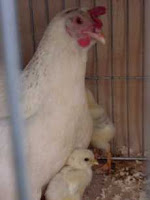 This year's poultry show was every bit as well supported as last year's, if not more so. There were hundreds of hens, ducks, geese and turkeys, several I hadn't even heard of, let alone seen. However, for sheer 'aaaaw' appeal, this little bantam with her chicks stole the show for me.

Judging the 'Champion of Champions must be a huge burden on the shoulders of whoever has that unenviable task because I really don't know how anyone can compare a horse to a cow to a goat to a sheep to a donkey to a goose! 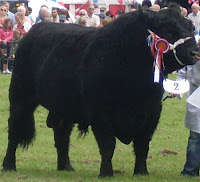 I had picked out my favourite, a Black Galloway bull with the rather undeserving name of Nancy Boy. He was rather docile, I have to admit, but I'm sure his name won't endear him to his future suitors.
Now that I come to think of it, do cows even bother to exchange names? Perhaps Nancy Boy won't have to deal with that sort of problem afterall. LOL 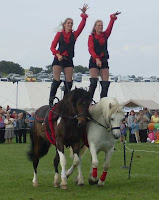 The feature act of the day was a performance by 'Jive Pony'. The team had travelled many miles to appear and the crowd seemed to appreciate their performance, particularly the audience participation part. The young guy concerned was escorted into the ring, dressed in a pink tu-tu and then legged up onto the Highland pony for his first ever riding experience. He did really well, considering the ribbing he endured from his friends.
We were also lucky enough to see one of the world's smallest owls. I'm guessing it was some sort of pygmy owl, but I didn't want to pay £3.50 for a photograph, so you'll need to do a search to see what it looks like. Maybe I'm just mean, but £3.50 is about half a bag of hen feed, so not an amount I was prepared to pay for a photo on the Frugaldom blog.
After the show we visited friends and shared a late afternoon cappuccino and chat on their patio. While there, I was able to take some cuttings (thanks, J) of an assortment of geraniums and some grapefruit mint. I'm thinking that an assortment of mint would be an ideal addition to the front 'garden' where each type could be planted in its own pot. This grapefruit one smells lovely.

It was then time to collect our new bantams. There are six in total, four Light Sussex X hens, one blue Pekin hen and a lavender Pekin cockerel. At the moment, they're beng quarantined in a 2m coop and run. In a couple of weeks, we'll let the X bred bantams out with the others but will need to keep the Pekins in the run so Billy Gruff, my blue cuckoo Silkie cockerel, doesn't attack his smaller counterpart.
That brings us back to what's happening in Frugaldom. Last night I was sure I heard a small squeak coming from the incubator. Today is day 17 for the quail eggs, so I shouldn't really have been surprised to come through this morning to find the first chick hatched and bumbling about in the incubator. Since then, a second has arrived and several of the other eggs are rocking and rolling, with the tell tale cracking sound of tiny beaks on shell.
Any chick from this lot is a bonus, as the eggs were all collected from my hens the week after they were seperated from the males. With no way of knowing how many, if any, would be fertile, I stuck 32 eggs in the incubator and crossed my fingers. 3 were removed shortly after that, but 29 remained. I wonder what percentage are fertile? I think we've reached 10% now, as I can see a beak pocking out of an almost open egg.
I'll update with photos as soon as I possibly can. For now, the incubator is remaining firmly shut. You can follow the updates by reading the section amed 'In the Incubator' on the free forums, which is where I normally upload the photos.
Frugaldom now has a new project to add to the list of many - we need to build an aviary to house some Diamond Doves that we are rehoming from the same person who gave us the bantams. He's leaving the area in a few weeks time, so we'll need to get organised soon to ensure we can house these new birds. There are a few others comig too, mainly zebra finches and bengalese, but we already have those species, so they'll mix OK after their quarantine period. The Diamond Doves, however, I'd like to see outside in their own space. More on this at a later date.
In the time it has taken me to edit and upload this post, quail chicks 3, 4, 5 and 6 have arrived! We've already passed the 20% mark. :)
Posted by NYK in Frugaldom at 13:02