Frugal Fun in the Sun, After the Rain

What a Difference a Day Makes! 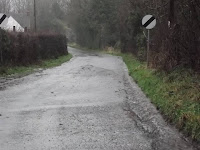 After the awful weather we've had since solstice, we were again subjected to high winds last night followed by a lovely, sunny day today! It seemed a shame to waste it, so as soon as the washing was done and hung out on the line, we set off to investigate what havoc the rains had played. I did try to walk along the road late yesterday afternoon, but only got a few hundred meters before it turned into a river, so I couldn't walk any further without going back for my big wellies. 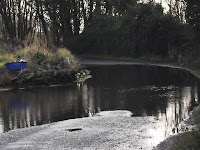 This morning dawned sunny and bright. According to news reports, several of the local roads were closed because of flooding and a coule more had be shut to allow for removing falling trees. (Clocked some firewood potential!) Today, I followed the same route I had taken yesterday, to see how things had progressed overnight, but only made it around the first bend before discovering that there was no way through without risking falling down the embankment! 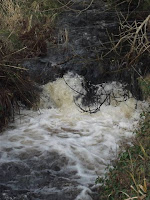 Our babbling little brook was still spewing water in all directions and, rather than the tiny stream, it was still a raging torrent, in places, so we certainly weren't going to get far in this direction, so we about turned and headed back up the hill and out the other way. The lie of the land meant that any flooding further up would be either shallow or flowing down the hill. 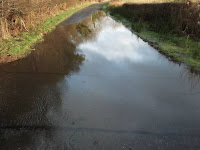 As it turned out, most of the water, barring one big puddle, had run off and was gushing into the ditches along the edge of the trees. 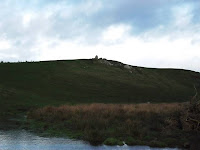 Once we reached the crossroads, the decision was made to head uphill, meaning any surface water was running, rather than standing hiding potholes. It was a lovely day, so a trip to the nearby standing stones seemed like a good idea. Getting up to the top of the hill would let me see all around and get an idea of just how much water was lying about the place.
One thing I forgot to consider was that once reaching the field that leads to the stones, it would be flooded! No chance of climbing up to the top. But if anyone is interested in this beautiful spot at the Chilcarroch standing stones, I have an album of photos on Facebook here.
Never mind, this is on a circular route, so a trip around the next village would make for an enjoyable couple of hours and we could stop at the motte hill en route. The main reason I wanted to go to the standing stones was to take more photos to preserve the views for future generations, to show the panoramic scenery from there before it possibly changes forever!
Nearby, posted by the side of the road, is the reason I am suggesting why the aforementioned horizon may change. A kindly, absentee landlord has taken it upon himself to propose a lovely windfarm for the area, comprising 18 turbines at an overall height of 134m - that's about five times the height of the town's historic county buildings.
As you'll can guess, this has caused a certain amount of unrest within the community, pitting neighbour against neighbour and, in some cases, tensions are rising. Being of the frugal and as green as possible ilk, I should probably be unquestioningly 'all for' such developments, but I'm still sitting on the fence, trying to sift through conflicting reports of how feasible these wind farms actually are. (Personally, I reckon the only way to find out is to temporarily shut down all non-green energy-production sources for 24 hours and see how well wind power copes with demand in an emergency situation. The realist in me realises this would probably result in the outbreak of major civil unrest!)

It's difficult to comprehend how high 134m actually is against a green, treelined horizon so, me being me, I HAD to investigate this for myself after hearing of this development application a few months back.
I set off and went exploring a real windfarm purely to give some scale to the 'problem', if that's how one perceives it. Trouble is, I could find only 125m turbines, so you'll need to imagine another 30' or so added to the top of this one I'm standing under in the photo. To make it easier to spot me, I have enlarged the relevant portion of the photo and tagged it on bottom right. The red arrow to left of this is showing you where the black spot above my head is in both pictures. THESE THINGS ARE COLOSSAL! We live in a low level, military tactical flying zone, where aircraft can fly to levels of as low as 50m from ground level...

But I digress - back to the day in hand and the circular route of frugal fitness and fun, past the standing stones, heading for Druchtag Motte and nearby Mochrum village, location of our local parish church.
Once again, I was foiled. I managed to jump over the flooded verges, negotiate the marshy approach and get through the gate to the hill fort, but scaling it was not going to be an option, it was simply far too wet and slippery. However, being a huge fan of such places, I do have a collection of photographs from previous, dry-weather visits, as we love going picnicing to the top of this hill. It's fun, it's frugal, it's free and it's very photogenic, like many of the sights we are blessed with around these parts. I really do love the area, even in the worst of weathers - it beats living in a town (for me) anyday! Photo album here, for those interested. 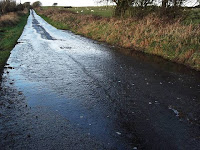 Onwards through the village and no signs of the roads, fields of verges being any drier, but it's amazing how much fun you can have slooshing through fast-flowing puddles and along lanes that look like river beds. Trouble is, you tend to get very wet. Probably just as well the sun wash shining and the wind was blowing at a rate of several knots. We were heading down hill now, so there was a great deal of water lying in the surrounding fields, run off from the nearby lanes, hills and bursting streams.
I should apologise for this lengthy pictorial post, I do tend to get carried away a little when out and about with a camera. You'll can tell that by the 1,700+ photos I have already loaded onto my Facebook page over the past year or so. But fear not, we're almost back at Frugaldom and not a penny spent.
You'll have realised by now that there are very few spending options about this corner of southwest Scotland, so it's rather easy to be frugal in that sense. The downside is having to pay a premium for ordinary stuff like food and fuel, while making do without sewers, drains, mobile phone signals, shops, modern conveniences, public transport and, if you are off the main 'street', mains water - it's from private wells. Frugal rural living in no way resembles frugal urban living, that's for sure. :)

Here is something that I found rather entertaining, although it's certainly not funny for the farmer.
On the right, you can just see the top edge of a five-bar gate. These are normally about 4' high and are hung several inches above ground level, so this 'puddle' is fairly deep! Fortunately, it had receded off the road enough for us to proceed on our way.
I'd to stop awhile and survey all around it and try to remember what is normally there. 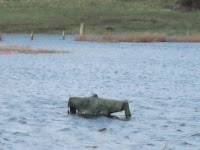 It's weird! No matter how often you pass something and 'see' it without looking, when it becomes unexpectedly obscured, your memory fails to tell you what is normally there. Or is that just me getting old?
On the left, in this next photograph, that's all that's left showing of the huge scarecrow who normally stands along from the gate.
This isn't far from home so, on that note, I'll end my ramblings, content in the knowledge that the flood waters are receding, the sun shone, I got my free dose of vitamin D, succeeded in completing 10.46 miles of trundling round wet roads and then ruined all that lovely exercise by coming home to have several mugs of (instant)coffee, cake brought by friend, and almost a full pack of ROSSPA discounted dates! OOPS!
I did remember to bring in the washing: despite the sun and the wind, none of it had dried, so it's now on the airer! I need to sort out a panload of chicken for curry and hope we can eat it all within the next 24 hours, as there's no room in the freezer for anything else until after Christmas dinner. Friend brought some cartons of lovely braised red cabbage - an annual tradition here, as she's ace at making it - that have been crammed into the last available space! In exchange, she left with a bottle of  homemade mixed berry 'pink champagne'. Fun and frugal festive times!
Hope everyone has had a good weekend.
Frugaldom.
Posted by NYK in Frugaldom at 19:04