Most exciting news for this weekend, so far, is that the mini webcam arrived safely yesterday and has been installed on the laptop and mounted on the side of the chick brooding box. I still haven't fathomed out how to set up live streaming video so, for now, we just have photographs automatically uploading to the site every 2 minutes. The chick fliks can be seen on Frugalcam HERE. 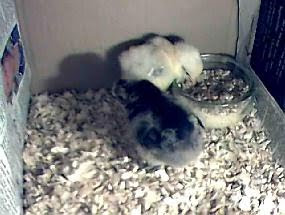 We're now at day 8 of the quail incubation, so I've just over a week to prepare for any eventual chick hatching. The homemade egg turner is continuing to function as required and the water level is being maintained by using my wacky funnel-flexi straw contraption, which has been brilliant, so far. Only once have I had to open the incubator during the past week and that was to rearrange the eggs so those around the edges could be switched with those in the centre, just in case there's a temperature difference. I'll be so annoyed if none of the eggs hatch after all this attention they've been receiving.

The three chicks that hatched out on the 25th/26th February are all doing well (as per frugalcam) and will be moving into a larger brooding box this weekend. Outdoors, the hens and ducks are laying well, now giving us up to 10 eggs a day, including a blue egg from the first of the Araucanas to start laying. having split up the purebreeds from the free rangers, I now have eggs being set aside for hatching. The Pekins and Silkies all seem to be laying and I have no need to doubt fertility, having just hatched the test eggs.

In the garden, the greenhouse has been swept clean and all the pots ready for planting up seeds. The ground is still pretty frozen in places, so there won't be anything getting planted in there just yet, but the fruit trees and bushes are all beginning to bud. The garlic is up about 5cm and I did have a lovely crop of parsley gettig through - until the ducks ate that. Mint is beginning to sprout and there may even be a little bit of life in some strawberry plants that I thought the hens had killed off completely. Under the big buckets, rhubarb has definitely started to grow and just last week, a friend arrived with a mushroom growing kit for me. :)

There's not a great deal I can do at this time of year other than digging and mulching wherever there's a thawed patch. Keeping on top of the duck devastation and hen escapades is an on-going battle of wits and wire mesh. The 5 male quail have now been rehoused into outdoor quarters but are refusing to use the chicken coop at nights. I can't say I'm surprised, but I thought they may, at least, have tried going up the ramp into the house. 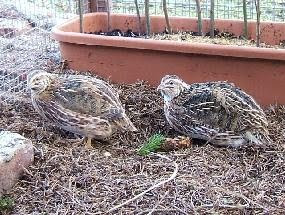 Bailey the pheasant is staying out all day and night now, preferring to wander around the edge of the fence. Yesterday, we had three red-legged partridges sprinting across the field, so it's nice to see they've survived the cold spell. We may be lucky enough to see some babies this year. I'd love to go back to breeding my ornamental quail - Californian, Gambels, Mountain, Blue Scaled etc - but self-sufficientish living means feeding the household comes first, even if the ornamental birds could fetch a fair few pounds per pair when selling the surplus. 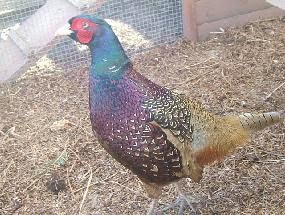 That's about it for this week's frugal round up. My biggest spend was £5.80 for a new webcam and my most receent cooking achievement was last night's Scotch eggs made form our own hens' eggs, homemade breadcrumbs and homegrown parsley. Very tasty, indeed!

Stop off for a visit at http://www.frugaldom.co.uk/
Posted by NYK in Frugaldom at 08:58